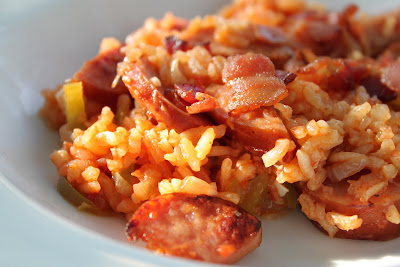 On our recent trip to the Charleston/Mt. Pleasant, SC area, we consumed a lot of red rice. It's a traditional side dish around these parts. I've never attempted to make it before mainly because my husband has an inborn hatred of tomatoes to the point that, as a small child, he once took a stick and beat down his neighbor's tomato bushes. But, I noticed on our vacation that he ordered it everywhere we went. He's fine with tomato sauce in recipes, just not chunks of tomatoes. I thought it was high time that I learned to cook red rice.

Most of the time, I choose recipes to share here that I think I can pull off. That doesn't always work out and I've abandoned many recipes along the wayside. This was a recipe that ended up with a little glitch at the end, but I was able to "fix" it and wanted to share my trials and tribulations here with you. This recipe is from Martha Nesbit's Savannah Celebrations. 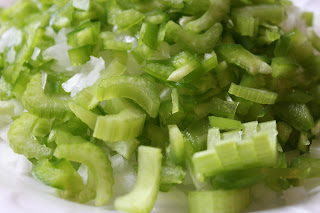 I put Eric to work as my sous chef. There's nothing the man loves more than chopping up vegetables. Here we have onions, green bell pepper, and celery. 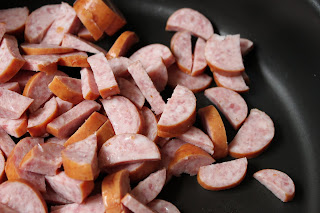 I decided to add some sausage to make this a main dish. I cut up a 16-oz. kielbasa and browned it up a little. Then, I removed it from the pan and set aside until I was ready to put the dish in the oven. 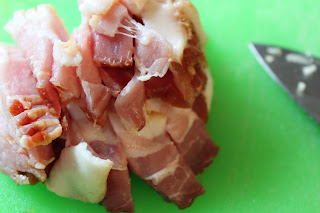 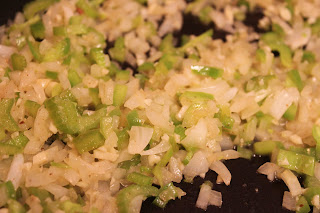 I added the chopped vegetables to the bacon grease. Even though I used four strips of bacon like the recipe required, I didn't have quite enough oil so had to add a few drops of olive oil. I cooked until the vegetables were soft. 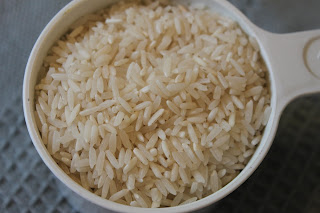 Then, I added the star of the show, the rice. 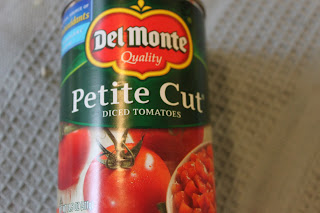 I had to make a slight adjustment here. Since my hubby will not tolerate chunks of tomatoes, I had to run these tomatoes through the food processor. I know, he's spoiled... 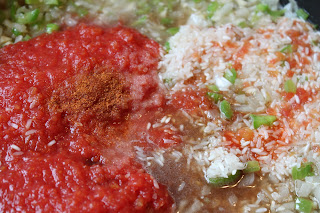 I added the rice, tomatoes (what's left of them), water, and spices to the sauted vegetables. 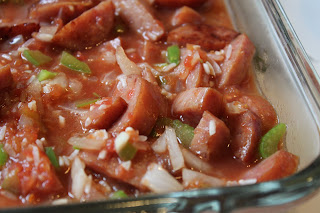 I stirred the sausages in and poured it all in a baking dish. I covered with foil and baked, as directed for 30 minutes at 350 degrees. Now, here's where things went wrong for me. At the end of the baking time, I pulled the dish out of the oven and took a peek. The rice was still hard and grainy, in other words, raw. What should I do? I was scared that adding more liquid would make it gooey but I knew I couldn't tolerate crunchy rice. So, I stirred the mixture, replaced the foil, lowered the heat to 250 degrees, and cooked it for another 20 minutes. At the end of that time, all was well. 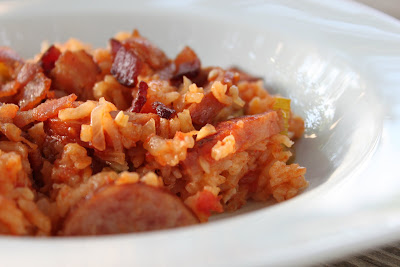 And, of course, the sprinkle of bacon at the end made the extra effort worth it. I think I've got my game plan for the next batch, lower the heat from the beginning and let the dish cook for a longer period of time, stirring at the half-way point.
The dish was delicious and we enjoyed it! Hope you'll give it a try, too.
Enjoy!!
Linked to: