Country-Style Ribs on the Grill 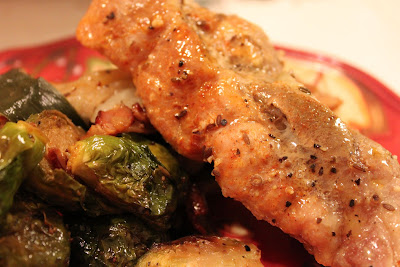 Country-style ribs are a staple in my freezer. I find them on sale fairly often and always buy two packs to make sure I don't run out. I cook them a number of ways: in the crockpot, baked in the oven, and boiled then grilled. But, since I'm such a fan of throwing a foil packet on the grill and forgetting about it for a while, I decided to try this with the country-style ribs. They were moist, tender, and delicious, the foil packet retaining the cooking juices which I used as my sauce or...au jus. No matter how you cook them, country-style ribs only need one thing to make them delicious - time! Oh, love and tenderness helps, too.
﻿
Country-Style Ribs
2 lbs. country-style pork ribs
Your seasonings of choice
1 onion, sliced
1 tbsp. olive oil
Lay the ribs on a large piece of heavy-duty foil that's been sprayed with non-stick spray. Season with your favorite spices. Lay the sliced onion on top of the ribs. Sprinkle with pepper, if desired, and drizzle with the olive oil. Wrap tightly and cook on the lowest heat setting on the grill, about 300 degrees for 1-1/2 hours. The meat should be able to break apart with a fork. 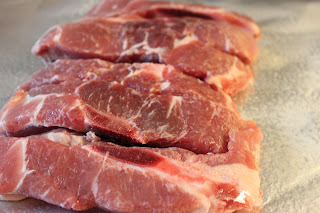 This is considered a family-size package of ribs. It has six ribs in it. I don't think it could actually feed more than three people. This is all I cooked this time, but I normally cook two packages of them whenever I bake them in the oven or put them in the crockpot. It's all according to how many people you're feeding or if you want leftovers. 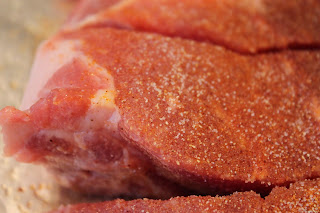 I sprinkled both sides of the ribs with seasoning salt and garlic salt. 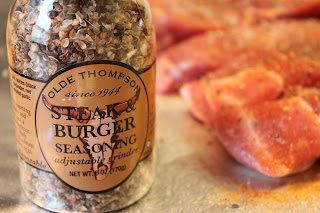 I grinded a little of this steak seasoning on top of the ribs. 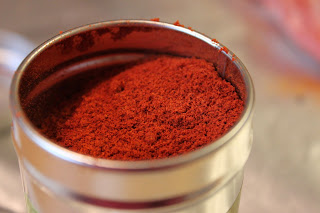 I tried out my new spicy smoked paprika. I loved the smell of it. I used it sparingly but should have used more. It wasn't as spicy as I feared. 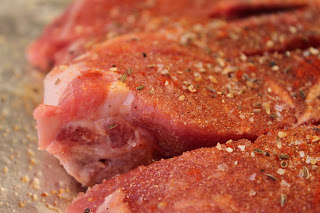 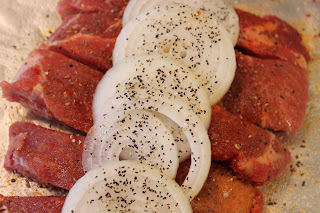 I wanted to add some flavor and moisture so sliced up this onion which I seasoned with pepper and olive oil. Wrap the ribs tightly and put on the grill. 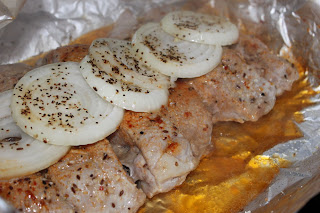 Here's a peek at the half-way point. 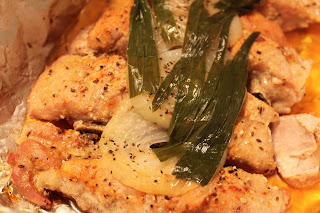 Now, here's what happens when I turn my back. Eric grows his own garlic and he cut off some of the garlic shoots and threw them into the mix. I must admit that they were delicious, but still... Do you see the little piece of meat that broke off on the right-hand side? That was my sign that they were done. 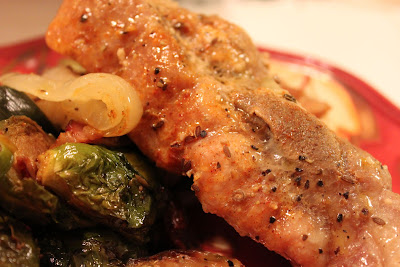 Another successful foil-wrapped experiment! I love easy...
I served them Roasted Brussels Sprouts.
Enjoy!!
﻿
Posted by Kim McCallie at 1:22 PM