{24-Hour Giveaway} from Pick Your Plum

I hope everyone is enjoying the Memorial Day festivities. To celebrate the holiday and to thank all of my readers, I'm working with Pick Your Plum to host a 24-hour giveaway running through 9:00 a.m. on May 28th. The giveaway features $50 worth of baking supplies. You can access the giveaway through my Facebook page at www.facebook.com/wellseasonedlife. Just click on the PYP Giveaway tab at the top of the page.

Also, I am now an affiliate of Pick Your Plum so you can order through my blog. See the PYP button in the right-hand column of the blog. Pick Your Plum has wonderful craft and baking supplies as well as clothing and accessories. They only sell one product a day, so check the web site daily. You never know when you'll want to pick your plum.

Thanks for reading and following A Well-Seasoned Life!
Posted by Kim McCallie at 3:18 PM No comments:

Email ThisBlogThis!Share to TwitterShare to FacebookShare to Pinterest
Labels: Giveaway

Breakfast for Dinner
by Lindsay Landis and Taylor Hackbarth
Quirk Books
At my house, we often have breakfast for dinner. Fortunately, my husband and children are always excited about the fact that we're having breakfast in the evening. My older son always makes a big production of telling the rest of us "good morning". My breakfast menu is a ritual - pancakes, bacon, and eggs scrambled with diced ham and onions. Since I am making breakfast in the evenings, I feel like I have a little extra time to experiment with homemade muffins or other baked goods that I wouldn't necessarily make in the mornings. 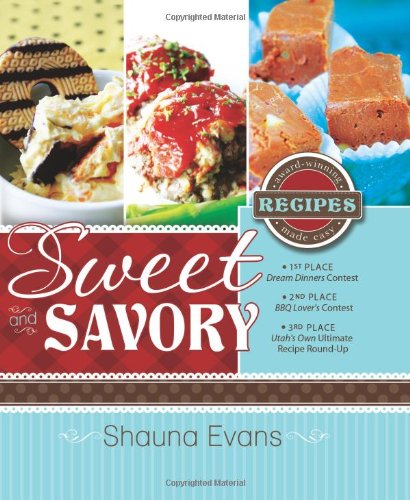 Sweet and Savory
by Shauna Evans
Published by Cedar Fort
Sweet and Savory by Shauna Evans is a compilation of recipes from members of Evans' family including both maternal and paternal grandmothers and her mother. Evans comes from a long line of award winners as these ladies have won many recipe contests over the years. In this cookbook, she shares with readers the simple, yet delicious recipes that have become legendary.
Read more »
Posted by Kim McCallie at 10:18 AM No comments: 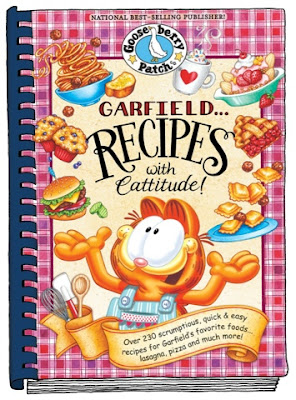 You do remember Garfield, don't you? I am a fan from back in the day. I used to have a stuffed Garfield suction-cupped to the back window of my first car back in the late 80's. I hope I didn't reveal my age in that confession. And, while Garfield never really went out of style, he's back. He's current. He's in the kitchen. He's teamed up with Gooseberry Patch and written a cookbook, Garfield...Recipes with Cattitude!


Contrary to popular belief, Garfield is NOT a lazy cat. He's been busy developing, and definitely testing, recipes in these categories:
In addition to the recipes, you'll be entertained by Garfield, John, and Odie graphics throughout the cookbook. The comic strips bring back happy memories for me. Those of you who know Garfield know what his favorite food is - lasagna! As you can see, there is a chapter dedicated to lasagna. There is a lasagna recipe to satisfy every Italian craving from traditional dishes such as Classic Lasagna, Bow-Tie Lasagna, and Cheesey Lasagna Rolls to updated versions such as Tex-Mex Chicken Lasagna and Creamy Chicken Lasagna.

Garfield has been known to eat a pizza or two...or three..so I chose to feature French Bread Sausage Pizza from the chapter, Lotsa Lasagna, Pasta and Pizza. My sons were in awe as I prepared this pizza. I guess I should make homemade pizza more often. They thought it was a sandwich and wanted a piece before I put it in the oven. I had to insist that they wait until it was cooked through. The pizza turned out perfect! My husband and sons quickly tore through it leaving nothing behind. It's definitely something I'm going to make again in the future. 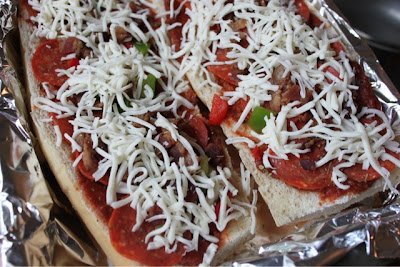 Cut loaf in half lengthwise. Place both halves on an ungreased baking sheet, cut-side up. Spread with sauce; top with sausage, pepperoni and cheese. Bake at 350 degrees for 15 minutes, or until golden and cheese melts. Slice to serve. Makes 6 to 8 servings.

My take: I added some diced red and green bell peppers because I already had some chopped up for another recipe. I also sprinkled on a little Italian seasonings before adding the cheese. 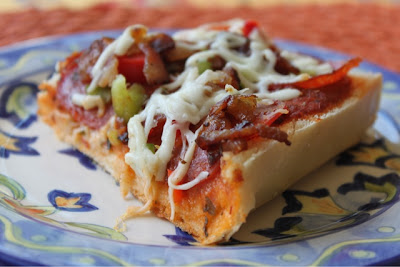 I think Garfield would approve.
Now, you know what's coming next. Do you want your own copy of this cookbook? You just have to have it! Whether you're a Gooseberry Patch fan, a Garfield fan, or both, you'll get a kick out of this cookbook. {Please allow a few moments for the widget to load.}

Disclaimer: Gooseberry Patch provided me with a copy of this cookbook; however, the opinion expressed here is my own. 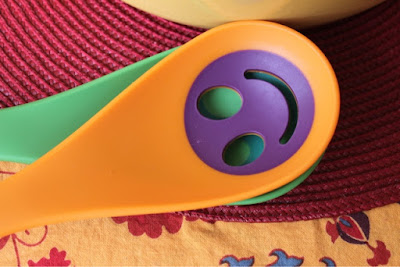 If you've been following me for a while, you know how much I love kitchen gadgets. I'm obsessed with spatulas and cooking spoons. You can only imagine how happy I was to get the chance to review these products from Kizmos Kitchen. Aren't these the cutest things you've ever seen? How fun would it be to have these in your kitchen? Here's a look at the more Kizmos Kitchen products.
Read more »
Posted by Kim McCallie at 1:39 PM 6 comments: 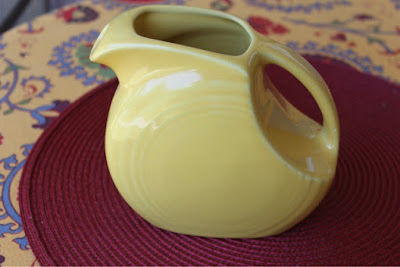 Fiesta Mini Disc Pitcher in Sunflower
Right after I met my husband in 1994, he bought a set of dishes...these dishes (below) with the ducks on them. He's a big duck hunter so his whole apartment was decorated with waterfowl. These dishes fit right in to the scheme. Brace yourself! We still use them. It's been 19 years and I haven't replaced them...yet. Why?!? Because I just didn't know what I wanted. I'm a pretty contented person. I don't do change well. Any numbers of reasons... But, the biggest reason for not replacing them is not knowing what I wanted to buy as a replacement. 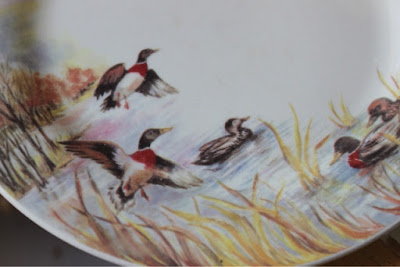 Duck Dynasty fans should be jealous!

After blogging for almost three years and buying small "prop" dishes here and there, I've started to feel antsy for some new dinnerware - full sets, not a dish or two here and there. As I've become more familiar with different types of dishes and kitchenware manufacturers, I've finally made my decision. I've decided that I will replace these wildlife dishes with an American classic, Fiestaware. 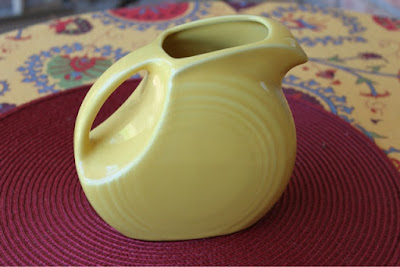 The Homer Laughlin Company that makes Fiesta was kind enough to send me this Mini Disc Pitcher to get me started. I chose the color, Sunflower, because it's so bright and cheery. This pitcher is the perfect size to use for breakfast. It holds the perfect amount of orange juice for the kids. 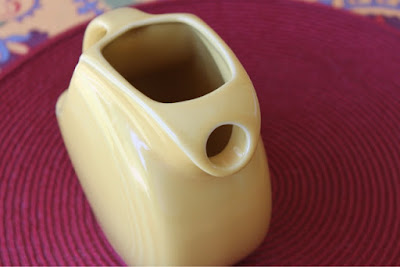 I love the sturdy feel of the pitcher and the fact that it all one piece which makes it easy to wash. I hate pitchers that come apart and have pieces that are difficult to clean. When you're not using it for beverages, it makes a perfect vase to hold some flowers from your garden or from your husband as a "thank you" for letting him keep his dishes for almost 20 years!
When I surveyed my Facebook readers about Fiestaware, they responded with enthusiasm! There are so many fans out there and I have become one of them. These are quality products made right here in the U.S.A. There's a huge selection of colors. I've decided to go with an assortment of colors for my dinnerware starting with Sunflower here and continuing with Lemongrass, Ivory, Scarlet, Paprika, and Plum. These dishes are affordable and I plan to purchase one set a time as I can afford them. It could be a slow process, but a satisfying one. I'll keep you updated to my progress.
Are you a fan of Fiesta? Which pieces do you have? Let's dish!
Disclaimer: Fiesta provided me a product to review, however, the opinion expressed here is my own. 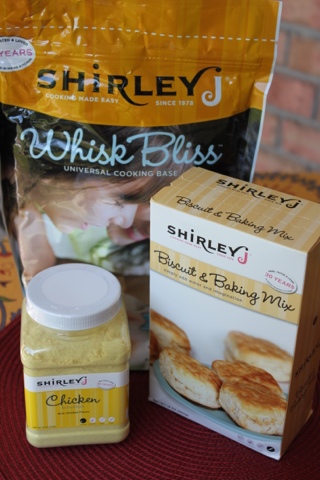 I was so pleased to be able to work with Shirley J. Shirley J is the creator of Whisk Bliss, a "universal cooking base" which can be used in any number of ways. In addition to Whisk Bliss, the company also sells universal cake mixes, muffin and brownie mixes, bread mixes, and seasonings. I had the opportunity to try out the Original Whisk Bliss and chicken bouillon to create Buffalo Chicken Casserole.
By following the directions of the back of the Orignal Whisk Bliss package, I was able to create a smooth, creamy sauce that could have been used in any number of ways. I chose to season it with the chicken bouillon; however, you could add cheese or some of your favorite herbs and spices. It truly is a blank slate. For more inspiration, visit the Shirley J web site. It's filled with recipes for each product.
Read more »
Posted by Kim McCallie at 1:42 PM 2 comments: