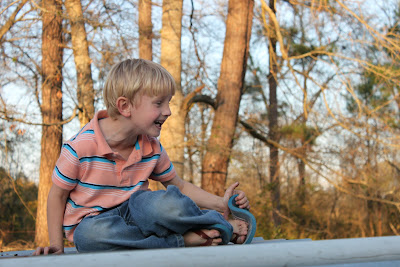 My six-year-old is obsessed with being outside. We hear "Let's go outside!" all day long until the sun finally sets at night or he gets tired, whatever comes first. As I'm typing this, he's outside practicing his newly acquired skill of swinging by himself, finally learning the rhythm of pumping and extending his legs. Thank goodness! This past Saturday was another gorgeous spring day so my little one decided he would spend the entire day outside enjoying the sunshine and dirt. But, this did not go off without incident. We had several unfortunate events that brought him back inside, searching for Mama.
Whenever the kids are out back playing, I open the kitchen windows so I can listen out for crying, sure signs of serious injury or frustration. My husband is outside, too, but he becomes invisible to them when they're injured. They need me! Sure enough, I hear the sound of crying drawing nearer as the back door swings open. My little nature lover had skinned his thumb knuckle and needed a band-aid. I applied the bandage and sent him on his way. "We'll wash it later..." No permanent damage yet.
Not long after that, he returns and starts with one of his famous openings, "I hate to have to tell you this... but I was climbing a ladder. It fell and I got stuck on the roof. So, I jumped off and fell and hurt my leg!" Being the concerned mom that I am, I asked if he was bleeding or broken. No? Good. Go! Back to the business of childhood.
The third incident brought both kids inside. My older son had "accidently" hit his little brother in the chin with a rope. "I was aiming for his butt." After I reassured them both that there was no blood underneath the dirt on his face, they quickly disappeared. 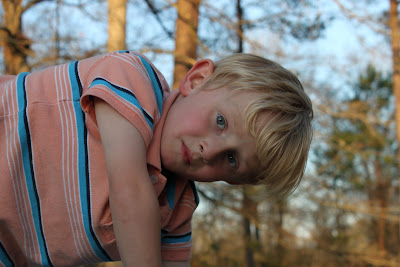 The fourth and final incident brought him and his dad inside. Through the screams, I heard my husband say, "Go find your Mama!" Words no mother likes to hear. Covered in dirt from heat to toe, his filthy face streaked with tears, my baby explained how he had fallen off his bike and busted his knee.
I can only take so much of this drama so I instructed my husband to fill the tub while I peeled off my son's dirty shoes and clothes. He cried because he was scared the water would burn his scrapes, but mostly because he knew his day was over.
Scrubbed clean, dressed in his pajamas, he finished his night eating hamburgers on the patio, oblivious to the now forgotten bruises and scrapes, only aware that it had been a good day. Because he had spent it outside, having fun.﻿
[Disclaimer: For those of you who are concerned - The ladder goes with an above-ground swimming pool and is about three feet tall and the "house" was a dog house. So, not as dramatic as it seems. I immediately clarified all of this with my husband as soon as I heard about it. So, there wasn't much danger involved unless you're six and overly dramatic!]
Posted by Kim McCallie at 5:47 PM