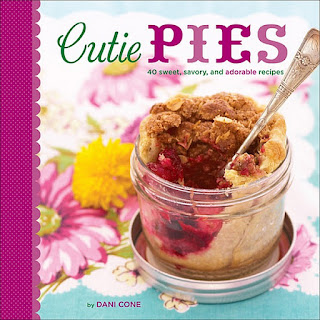 Cutey Pies
by Dani Cone
Andrews McMeel Publishing
Several weeks ago, I made pie crust for the very first time in my life. Due to my incompetence in working my new food processor, I ended up making the crust by hand. I can't tell you how empowered I've felt since then. How something as basic and simple as making pie crust can make you feel invincible in the kitchen. I feel it's opened up a brave, new world of recipe possibilities.
So, with this newfound power, I had to get my hands on a pie cookbook. I was so glad that Cutey Pies by Dani Cone came into my life. Dani Cone owns High 5 Pie and Fuel Coffee in Seattle, Washington. She learned to make pies from her Grandma Molly and has taken the traditional pie to a whole new level.
Of course, the cookbook begins with a pie crust recipe, "The Perfect Crust" - and it is a perfect crust because it can be used to make Cutie Pies (standard muffin tin), Petit-5s (mini muffin tin), Pie Jars (to justify my recent purchase of a case of Mason jars), Flipsides (hand-held pies), Piepops (pie lollipops), and full-size pies. And, while each of the categories has its own section of recipes, the recipes can be used interchangeably with any style of crust. 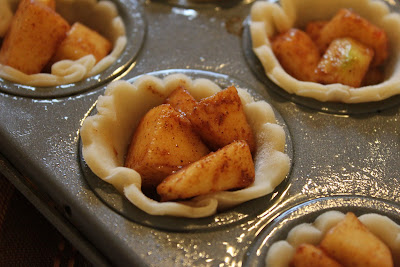 While I tested a classic, the Very Best Apple Cutie Pies with Crumb Top, there are many unique recipes - Pear-Cranberry Ginger, Bountiful Berry Black-Bottom, Spiced Plum Walnut, and Peach Ricotta-Honey. But, these Cutey Pies aren't just for desserts - there are plenty of savory recipes to choose from for appetizers or main dishes: Three Cheese and Onion, Good Ol' Mac and Cheese, and Salmon, Cheese, and Dill.﻿ How does a Broccoli, Cheddar and Mushroom Flipside sound for dinner tonight? 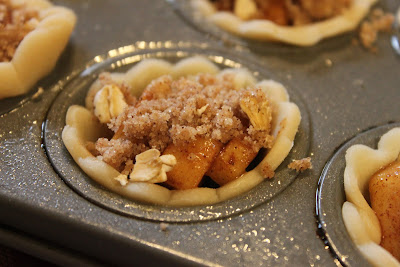 ﻿
The Very Best Apple Cutie Pies
6 to 8 medium Granny Smith apples
1 tbsp. cornstarch
1/4 cup firmly packed brown sugar
2 tsp. cinnamon
Pinch of salt
All-butter crust (Recipe in Cutey Pies or use your favorite pie crust recipe)
Crumb top, optional (see recipe below)
Vanilla ice cream, optional
1. Preheat the oven to 375 degrees. Place a rack of the center of the oven. Spray the cups of a muffin pan with nonstick pan spray.
2. To make the filling, peel, core, and cut the apples into 1/2-inch cubes.
3. In a small bowl, mix together the cornstarch, brown sugar, cinnamon, and salt.
4. In a large bowl, combine the apples and the cornstarch mixture, tossing to make sure the apples are well coated.
5. To make the crust, follow the All-Butter Crust recipe and roll out the dough per the instructions.
6. Cut 16 (5-1/2 inch-diameter) circles from the dough. Reroll the dough scraps to make all the circles, and avoid overhandling the dough.
7. Gently but firmly press each dough circle into a muffin cup. For the edges, use the fold-tuck-crimp method (see page 13) for each Cutie Pie.
8. Spoon the filling evenly into the Cutie Pie shells, and set aside.
9. If choosing the Crumb Top option, follow the Crumb Top recipe and sprinkle it over the apple filling.
10. Bake for 25 to 30 minutes, until the crust is golden brown. To see whether the bottom is golden, too, use a butter knife to pop a Cutie Pie out of a muffin cup. If the bottom is not brown, bake a few minutes longer. If the pie top is browning too quickly, cover with foil for the final few minutes.
11. After each Cutie Pie is cool, top with vanilla ice cream, if desired. 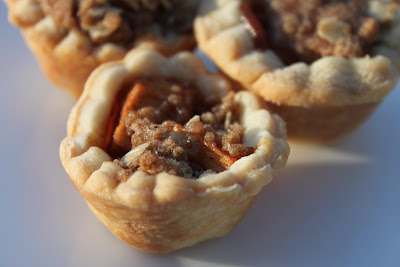 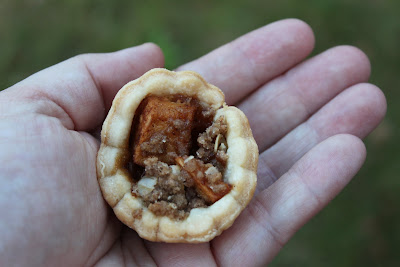 ﻿
Pies are quickly becoming the "new" cupcakes. Get in on the ground floor with Cutey Pies. This is such a fun cookbook. I loved the photographs of the tiny pies and am so inspired to master pie-making. I can't wait to make my next batch of Cutey Pies. Cutey Pies would be the perfect Christmas gift for a friend or for yourself.
Disclaimer: The publisher provided me with a copy of the cookbook but the opinion expressed here is my own.
Posted by Kim McCallie at 8:40 PM