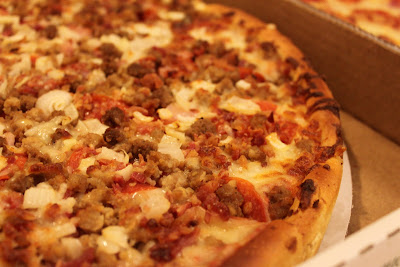 ﻿Due to my husband's job, he is currently spending a lot of time in Anderson, SC. And, during his stay, he has discovered a local pizzaria that he has been patronizing on a regular basis: Eddie's Pizzaria. Reminiscent of a place from Food Network's Diners, Drive-in's and Dives, Eddie's Pizzaria is located in a convenience store at a gas station. But, that doesn't stop it from being wildly popular and extremely delicious.
When my husband left work this past Friday afternoon, he called me to ask if I would like to try out some of Eddie's pizza. Well, of course, I did! And, even though the food had to endure a rather lengthy ride home, it was still great! 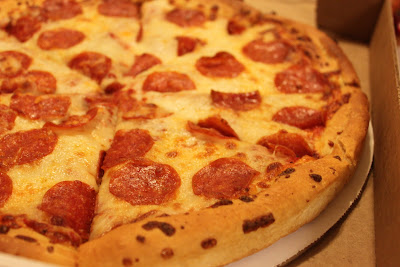 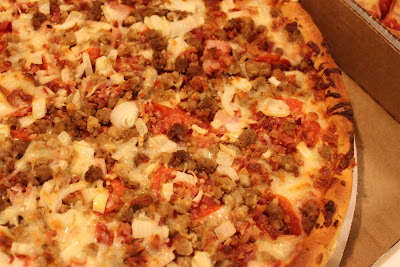 My husband and I enjoyed his favorite - Meat Lovers, a mix of beef, sausage, pepperoni, bacon, ham and Canadian bacon. We also had Mr. Mike, the owner of Eddie's Pizzaria, throw on some onions, too. This pizza was absolutely wonderful. There wasn't one inch of it that wasn't covered in meat. Plus, the toppings were finely chopped so that they weren't falling off while you were trying to eat it. I will say that it is the BEST meat pizza I've ever had in my life. I may be moving to Anderson, SC just to be near it. 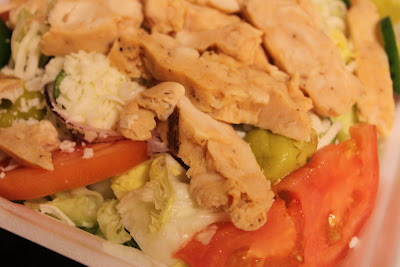 While my husband was waiting for the pizza to cook, he was shooting the breeze with Mr. Mike and let him know that I write about food. Mr. Mike insisted we also try his grilled chicken salad which was topped with tomatoes, cucumbers, and pepperocine peppers. It was served with his homemade ranch dressing. There is nothing I love more than homemade ranch dressing. Like the pizza, the dressing was crazy good. I want more.
Apparently, Mr. Mike also insisted we try some of his roasted garlic chicken wings, but let's just say those didn't make it home. Someone decided that he needed to eat those as an appetizer...But, I'm willing to bet they were awesome, too.
Eddie's Pizzaria offers a full selection of salads including chef salad, antipasto salad, and Greek salad in addition to the grilled or fried chicken salads. He also serves over a dozen hot oven subs and a selection of cold sandwiches. I see a gyro sandwich on the menu that has my name written all over it.
But, oh the pizzas. How I will be haunted by the pizzas with any combination you choose including the House Special (beef, sausage, pepperoni, onion, mushrooms and green peppers) and my beloved Meat Lovers! I will think of you often and count the days until we're able to meet (or meat) again...
Eddie's Pizzaria is located at 3300 Abbeville Highway, Anderson, SC 29624. Telephone: (864) 296-2620. They are open Monday-Saturday.
Posted by Kim McCallie at 12:42 PM