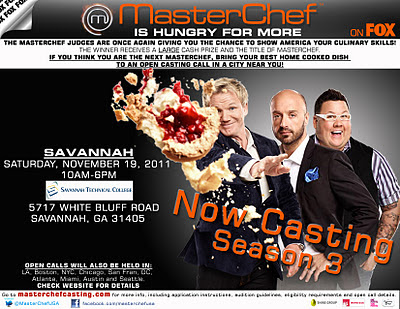 Fox's MasterChef Season 3 is casting in Savannah, GA on November 19, 2011! Let the casting staff know you read about this on A Well-Seasoned Life and move to the priority line.
Here's more information from the press release:
Chef Gordon Ramsay will once again give talented amateur cooks the chance to prove to him, and to fellow judges, restaurateur Joe Bastianich (Del Posto, Eataly) and Chef Graham Elliot (Graham Elliot, Grahamwich), that they have what it takes to make their mark on the culinary world. In the series, Ramsay, Bastianich and Elliot coach and critique the amateur cooks in a series of challenges designed to test their palates, knowledge and determination to follow their dreams of making a mark in the culinary world.
MASTERCHEF will travel to more cities than ever before to uncover the country’s very best amateur  cooks. Here's the information for the Savannah try-outs:


SAVANNAH, GA
Saturday, November 19, 2011
Savannah Tech College
5717 White Bluff Road
Savannah, GA 31405
10:00 AM – 6:00 PM
Over the past two seasons, the $250,000 grand prize and title of “MasterChef” have gone to Jennifer Behm, a realtor from Wilmington, DE; and Whitney Miller, a student from Poplarville, MS. Since winning the show, Whitney Miller released her first cookbook, while Jennifer Behm is currently writing a cookbook and already has established a successful private catering company.
Additional casting information, including forms and eligibility requirements, are available online at
http://www.masterchefcasting.com/. MASTERCHEF is produced by Reveille and One Potato Two Potato and is based on a format created by Franc Roddam and Shine. Shine International handles distribution for the MASTERCHEF format. Elisabeth Murdoch, Robin Ashbrook, Gordon Ramsay, Adeline Ramage Rooney, Pat Llewellyn and Ben Adler serve as executive producers. Become a fan of the series on Facebook at
www.facebook.com/masterchef and follow the series on Twitter @masterchefonfox.

Good luck to all who try out! I would love to see someone from the Savannah area pull out a victory this season. I'll be watching! And, remember to tell the staff that you read about this on A Well-Seasoned Life.
Posted by Kim McCallie at 5:50 PM