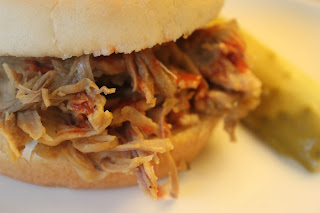 BBQ is one of the most subjective foods out there. Whenever a new BBQ joint opens up in town, it's hard to trust anyone else's opinion on the quality and taste of the food. My husband and I are the only ones in our house who eat it and even we disagree on the subject. I prefer pulled pork while he prefers chopped. I don't like my meat to taste smoked but he loves the smoked taste so much that, at one point, he smoked three different kinds of meat on his smoker just to see which one he liked the best. We both like a mustard-based sauce but I tend to lean toward tangy while he prefers the sweetness.
But, we both like my pulled pork. We just doctor it up when it's done to suit our tastes. When my brother got married nine years ago, I catered his rehearsal dinner. He's a huge BBQ fan and I cooked three crockpots full of Boston Butts. I keep the sauce light while I'm cooking and serve several kinds of sauce on the side. I personally like to add a few drops of Crystal Hot Sauce to mine. No heat - just tang!
This is another one of my method posts. I wouldn't dare tell you how to cook and season your BBQ. Just add whatever seasonings and sauce that you like. This method is easy and serves a crowd. 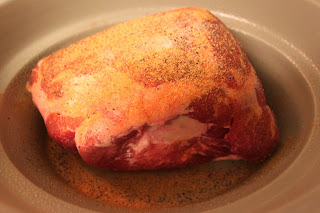 I spray my crock pot with cooking spray. I like to sprinkle a little seasoning salt in the bottom of the crock then add my seasoned Boston Butt. I use seasoning salt, garlic salt, and pepper. I add about 1/2 cup of water to the crock and turn it on low. Cooking times will vary based on the size of the meat, but I would dedicate about eight hours to it. It works well to cook it overnight and it's always nice to wake up to a finished meal. 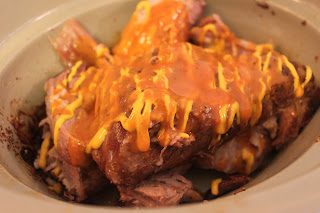 ﻿When the pork is thoroughly cooked, I remove it from the crock and drain out all of the water and grease from the crock. I pull and cut the meat from the bone and remove as much fat as possible. The meat will probably still be in big chunks and may not shred at this point. I return it to the crock and add the sauce. This picture looks a little odd, I know. The sauce was a little too sweet for me, so I added some plain yellow mustard to give it a tangy kick. I cooked it on low for about another hour or so and was able to shred it with two forks. 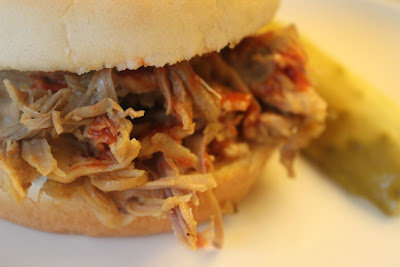