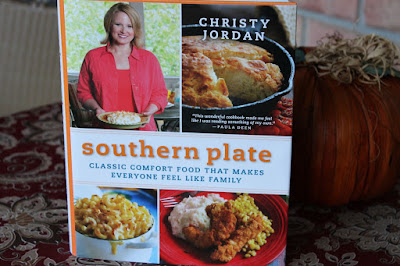 I am new to the blogging community not only as a writer but as a reader as well. Within a brief amount of time, I have seen how powerful the blog can be as a vehicle for both communication and creativity. But, as much as I enjoy visiting other blogs and cooking sites, I still love the feel of a cookbook - smoothing my hand across the jacket and turning it over to read the back cover, the spine - anything to prolong the excitement I feel as I open the front cover and step into the writer’s kitchen.

My favorite feature on a bookseller’s web site is the “Coming Soon” section. And, a couple of months ago, I saw a forthcoming cookbook with an interesting title: Southern Plate

. I’m partial to anything with “southern” in the title being from Georgia and all. At the time, I didn’t know anything about Christy Jordan and had never heard of her Southern Plate blog. But, I loved the cookbook’s description so put it on my Wish List and finally preordered it for its October 5, 2010 release.

In the meantime, I shyly clicked on to the Southern Plate blog to check it out. I say shyly because whenever I visit a blog, I feel like I’m walking into the middle of a party that’s in full swing with everybody knowing each other and having fun, and, upon my arrival, the music stops and someone yells, “Hey, who invited the fat girl?” But, Christy’s blog is filled with a legion of warm, dedicated readers. I could feel their love and admiration for her leaping off the screen. And, I do feel that her affection for them is as genuine as it would be for her own family members.

But, as much as I was attracted to her blog, I knew that the only way that I could truly get to the essence of Southern Plate and Christy Jordan was by reading the cookbook itself. So last night, I crawled into bed with the book and spent the evening reading the stories and head notes that accompanied the recipes. Because I had not followed the blog, every story and recipe was new to me. New in a familiar sort of way. New in that the words were hers but familiar in that the experiences were close to my own. And, I laughed and reminisced. Christy tells a story about how her grandmother cut out a recipe because the lady who submitted it looked “friendly” in the photo. My Mema cut out a picture from the newspaper of a girl standing by a horse. She framed it and nestled it in with the photos of the rest of us grandchildren. Christy’s husband’s grandmother left her with a stack of recipes to catalog. My Mema will leave me with a stack of obituaries…

I’ve never met Christy Jordan, but I already know her. She’s my neighbor, my cousin, my friend, and, in some sense, me. If Christy ever reads this post, I want to leave her with a little note: it’s not hoe cake, it’s hoe bread! And, I see your sweet pickle relish, and raise you dill!! ;)
Posted by Kim McCallie at 6:26 PM