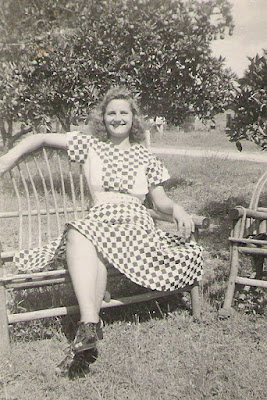 Today is my Mema's 86th birthday. I'm so blessed to have had this woman in my life for all of these years. ﻿
When she celebrated her 80th birthday, I wrote a speech for the event and, in that, I called her a pioneer woman. I know that there is a famous "Pioneer Woman" out there on the internet now. But, my Mema is the original one. When my mom was growing up, she remembers Mema throwing her shotgun over her shoulder and heading off into the woods behind their house, coming back home later with the night's supper - squirrels.
Mema's no stranger to firearms. Once, when my cousin and I were spending the night with her, there was a ruckus in the backyard. Mema went out on the back porch where she was faced down by a huge tusked opossum. She released a blast that knocked that creature straight to the ground. And, just in case he was "playing possum", she let loose another shot. He never moved an inch after that. 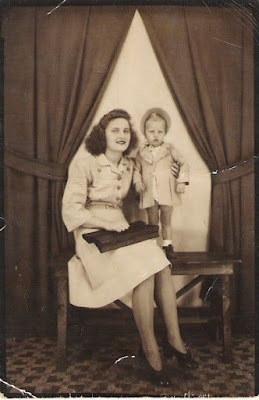 She's raised six children so she knows how to feed people. She's wrung the necks of many chickens and she's ended many a fish's life by the hook of her cane pole. No fish was too small to be fried and eaten, bones and all.﻿ She could whip up food faster than a short order cook, three meals a day. If her husband, my Papa, ever ate in a restaurant then I've never known about it. If you walked in her house, she would head to the huge chest freezer, plunder around for a little while, then start frying. You would be sitting at her table and eating before you even realized you were hungry. 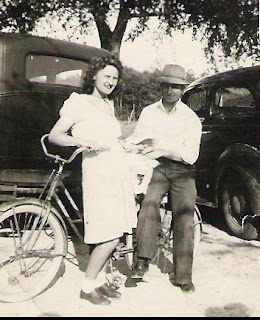 When she wasn't standing in front of a stove, she was sitting in front of a sewing machine. I didn't quite inherit that skill, but my mom and her sisters did. Mema's made clothes, aprons, and quilts for every person in the family. I once tried to "help" her cut out a pattern for a project I was working on. She had to take over, shaking her head ,and saying, "I can't believe that you can't even cut a straight line."

Some of my best childhood memories took place at Mema's house. When I was little, it was always hard for my mom to get me to leave. Mema would have to pack me a little bag of snacks to get me out the door. My mom now does the same thing for my kids. There's just something about Grandma's house - you just never want to leave. I can leave without snacks now, but I always take away a bag of memories every time I visit. Happy Birthday, Mema. I love you!
Posted by Kim McCallie at 9:48 PM

Email ThisBlogThis!Share to TwitterShare to FacebookShare to Pinterest
Labels: Family