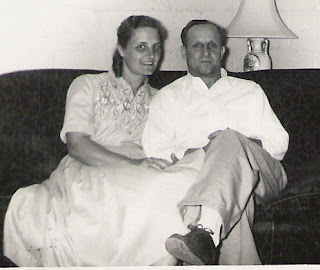 The Christmas season always makes me think about my Papa. He passed away in 1998 and left a big hole in my family's holiday celebration. There was nothing like getting a phone call from Papa requesting what he would like to have for Christmas. Then, on Christmas Eve, he was more excited than any of us grandchildren. His Christmas cards were ripped open and any money that was inside would immediately be placed in his wallet. He would tear through his gifts critiquing each one and trying on clothes and slippers as he opened them. That way, he could send them right back home with you if they didn't fit or weren't exactly what he had in mind. Not that he wasn't grateful for what he got, he just didn't want to keep it if it wasn't just right. Unlike his wife, my Mema, who would just pack it away unopened to save for "hard times". Papa had seen hard times in his life and he wasn't planning on waiting for them to come around again. 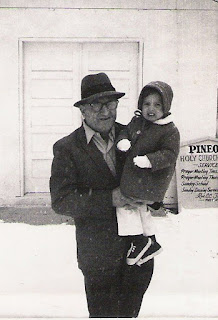 Although he made a living as an auto mechanic, he was known as Preacher Toole around town because he was also a Church of God pastor whose sermons held warnings of "hell-fire and brimstone".  But, all his grandchildren ever got from him was love. Every year, on the last church service before Christmas, he would would end the sermon by bringing out cases of apples and oranges and would distribute them among the small congregation. Papa grew up during the Great Depression and I know how much it would have meant to him to receive anything for Christmas and I'm sure that fruit would have been a special treat for the poor, little boy still living inside of him. The fruit was really a symbol of his gratitude that God had blessed him and he devoted his life to showing his appreciation.
Even though Papa passed away twelve years ago, the memories he provided are alive and well in my heart. And, I like to think of him in Heaven now watching down over us this holiday season, deeply satisfied and wanting for nothing.
Merry Christmas!!
Posted by Kim McCallie at 8:41 PM