Cookbook Review: Lighten up, Y'all 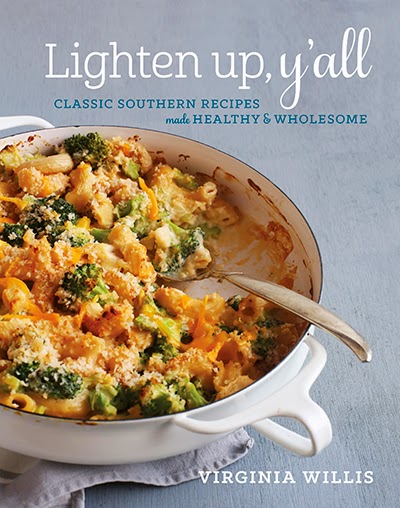 I'm always drawn to cookbooks that feature southern cuisine. It's the food that I'm familiar with, the food that makes me comfortable. I've been following Virginia Willis for quite a while on Facebook and Twitter and am happy to see that she has released a new cookbook.

In Lighten up, Y'all, the author introduces herself to readers by sharing her weight struggles and explaining the misconceptions that some people may have about southern foods being unhealthy. She then sets out to lighten up classic southern recipes with the goal of keeping the delicious flavors of the dishes intact. Recipes are divided into ten chapters:

With easy substitutions of ingredients such as light mayonnaise, cheese, and Greek yogurt, the fat is reduced in classic dishes such as Sinless Seven-Layer Dip, Hot Mess Spinach and Feta Dip, and Lightened-Up Pimento Cheese. Vegetables and main dishes that are traditionally fried are prepared with a small amount of oil in a skillet or are baked in the oven. This cookbook proves that small changes can have a positive impact on your health without sacrificing flavor.

This cookbook is perfect for fans of southern cuisine as well as those readers who are trying to lightened up their cooking style.

From the Random House web site:

Virginia Willis is the author of Bon Appétit, Y’all, which was nominated for the IACP Best American Cookbook award and voted the Comfort Food Book of the Year by the Chicago Tribune. She has been featured in Cooking with Paula Deen, House Beautiful, Washington Post, Houston Chronicle, and San Francisco Chronicle, among other publications. Willis has appeared on Real Simple Television, Martha Stewart Living, Paula Deen’s Best Dishes, and numerous local television shows across the country.

A graduate of L’Academie de Cuisine and Ecole de Cuisine La Varenne, Willis has served as a television producer for Turner South and Shirley Corriher, was the kitchen director for Martha Stewart Living Television, and the executive producer of The Discovery Channel’s Epicurious. She lives in Atlanta, Georgia. Learn more at www.virginiawillis.com.

For more information on this cookbook, please visit RandomHouse.com.

Disclaimer: I received this book from Blogging for Books for this review.
Posted by Kim McCallie at 2:48 PM