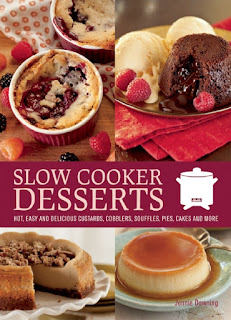 Do you own a slow cooker? My guess is you do. I think it's safe to say that the majority of people out there own one, especially if you're the kind of person who reads food blogs. I have several including the mini crock and I've been trying to use them more often as I know that not only do they save energy but also the hassle of cooking dinner when you get home from work. All of the work is done for you. But, did you know that slow cookers aren't just for main dishes and warm appetizers? They are also perfect for desserts.

In the new cookbook, Slow Cooker Desserts: Hot, Easy and Delicious Custards, Cobblers, Souffles, Pies, Cakes and More by Jonnie Downing (Crockpot Ninja), you'll discover that almost any kind of dessert can be cooked in a slow cooker. There are six chapters filled with delicious desserts:


As the author states, all of the recipes in this cookbook were tested in a 6-quart round slow cooker. My slow cooker is a 4-quart oval cooker so I had to make a few adjustments in the recipes I tested as some of the recipes call for the desserts to be "baked" in baking dishes and bread pans that fit inside the slow cooker.

Here are just a few of the recipes that can be created in the slow cooker: Classic Chocolate Cake with Frosting, Pound Cake, Mini Berry Cobblers, Blueberry Cream Cheese Cobbler, Cocoa Brownies, Banana Bread, Lemon Bars, Shortbread, and Easy Day Blueberry Cake. For this review, I tested the pound cake and banana bread.

Until I tested these recipes, my only experience with "baking" in the slow cooker was making the infamous chocolate cobbler which I'm not a fan of since I don't like gooey desserts. Both the pound cake and the banana bread cooked nicely and weren't gooey at all. They had the consistency of cakes that had been baked in the oven. I do have a confession...I overcooked the pound cake. It was my fault not the recipe's fault. Instinctually, I knew it was done by smell and color, but just kept on cooking it. Don't ask me why. Trust yourself in the kitchen...

Now, some of you may ask why one would cook a dessert in a slow cooker instead of baking it in the oven. I asked myself that question, too, and came up with a few answers. First, if you're a fan of warm desserts such as cobblers and crisps then the slow cooker is the way to go as it can keep the dessert warm until you're ready to serve it. Second, if your oven is old like mine, it's nice to know that there's an alternative for making desserts if the oven goes out on you...which it will...without warning. Finally, the slow cooker will keep your kitchen cool in the summer so you no longer have to let the calendar control your baking.

So, if you're a fan of slow cooking or you want to stick to that resolution you made a couple of months ago to start using your slow cooker more often, then you may want to consider investing in this cookbook. All of the recipes have common ingredients, most of which you probably have in your pantry right now. Hurry up and start slow cooking!

Disclaimer: The publisher provided me with a copy of the cookbook; however, the opinion expressed here is my own.
Posted by Kim McCallie at 4:54 PM