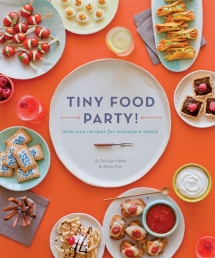 The new year starts tomorrow! I'm sure that many of you are busy making your resolutions. Some of you may be planning to diet, to cut your spending, or to cook from scratch. I'm resolving to do a combination of all three of those. If one of your resolutions is more cooking and entertaining at home, then Quirk Books has two new cookbooks that you may want to consider adding to your collection.

The first cookbook, Tiny Food Party! has perfect recipes for entertaining at home. The recipes are divided into parties: Tiny Snack Party, Tiny Dinner Party, Tiny Dessert Party, and Tiny Cocktail Party. In addition to the recipes, the authors provide you with sample menus and helpful hints along the way.

And, yes, all of the recipes produce small, bite-size goodies such as Potato Salad Bites, potato salad served in baked wonton cups. I'm a big fan of Mexican food so I was drawn to the Tiny Food Fiesta menu with bite-size Taquitos, Beef Empanadas, and Fried Tacos. And, what tiny food party would be complete without desserts such as One-Bite White Chocolate Cheesecakes, Baby Boston Cream Cakes, and Mini Homemade Pop Tarts? The pop tarts would be perfect in your child's lunchbox, too.

This is a beautiful cookbook with full-page, full-color photos of each recipe. Along with the recipe for the tiny bite, there is also a recipe for the suggested dipping sauce and many of these sound delicious! Wouldn't you like to dip a Mini Crab Cake in Roasted Red Pepper Aioli? I love to make homemade condiments so I know I'll be using these recipes in the future. 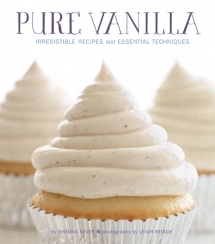 Pure Vanilla
by Shauna Sever
Quirk Books
I was so inspired by the recipes in Shauna Sever's Pure Vanilla that I went online and ordered a bottle of vanilla bean paste. As soon as the bottle arrived, I made the Ultimate Vanilla Cupcakes with vanilla frosting. Delicious!

The cookbook begins with a complete history of vanilla, from its origin to the different forms of the luscious bean. Also, in this cookbook, the author teaches us that vanilla isn't just for desserts, it can be used in breakfast dishes, too. If you're a fan of vanilla, you can start your morning with Vanilla, Brown Sugar, and Black Pepper Bacon followed by some Honey-Vanilla Granola Clusters, or Vanilla Waffles. You'll probably find me munching on Glazed Vanilla Bean Doughnuts.

But, the majority of the cookbook is dedicated to desserts as you can imagine. The Cakes & Pies chapter is filled with beauties such as the Vanilla Cloud Cake, Twinkie Bundt Cake and Vanilla Cream Pie. The Cookies & Bars chapter includes Vanilla Snaps, Vanilla Biscotti, and Salted Vanilla Chip Oatmeal Cookies.

The final chapters are on Candies & Confections and Custards & Creams, and Drinks. If you're resolved to do more cooking from scratch, try out a recipe for Vanilla Bean Marshmallows or Candied Vanilla Popcorn. Or, whip up a batch of Creamy Vanilla Rice Pudding or Nutty Vanilla Spread.

This, too, is a beautiful cookbook filled with full-color, full-page color photos of many of the recipes. I'm sure you'll be as inspired as I was to expand your baking an experiment with vanilla bean paste, pure vanilla extract, and vanilla sugar.

Disclaimer: The publisher provided me with review copies of the cookbooks; however, the opinion expressed here is my own.