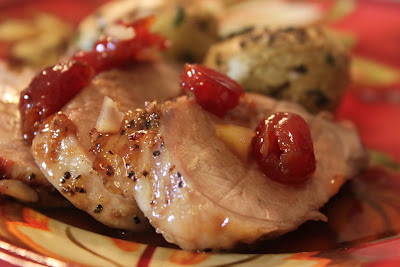 Sometimes you have to step out of your comfort zone. That's why I study cookbooks, why I read them over and over again. Each time I open a cookbook, I read it was a new set of eyes, looking not only at the recipes that I know I would love but also looking at recipes that seem totally different than anything that I would ever cook or eat. I can't count the number of times I've read Johnnie Gabriel's Cooking in the South, copyright 2008. Yes, I was drawn to the many traditional Southern classics included in the book, but this recipe beckoned me. And, still in inspired resolution mode, I followed.

Preheat the oven to 350 degrees. Rub the pork loin with salt and pepper. Roast, uncovered 2-1/2 hours, or until the meat thermometer reaches 185 degrees.

In a small saucepan heat the preserves, corn syrup, vinegar, almonds, salt, nutmeg, and cinnamon to boiling. Reduce the heat to simmer and cook 2 minutes. Spoon the glaze over the roast and return to the oven for 15 minutes. 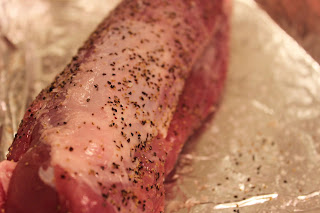 This pork loin weighed a little over two pounds. It was actually two smaller pork loins but I baked them together to keep the smaller one from drying out. I baked it in a foil-lined pan and seasoned with salt and pepper. Because the loin was smaller than the one recommended in the recipe, I had to vary my cooking time. This cooked for about an hour and a half. You will need to adjust your cooking time to the size of the loin. After an hour in the oven, I did separate the loins to ensure thorough cooking. 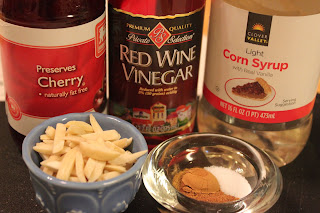 While the loin was cooking, I made the sauce. 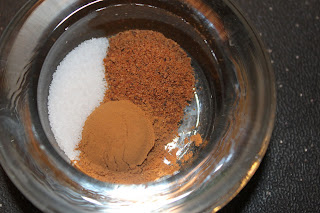 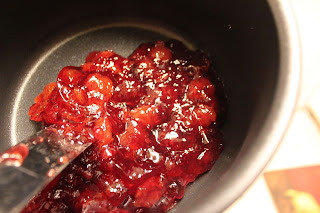 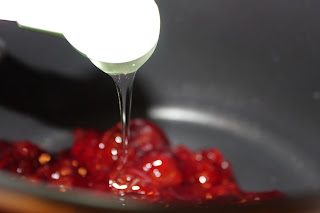 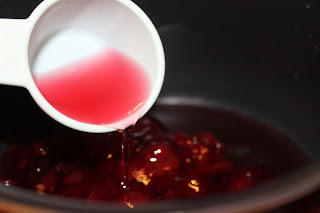 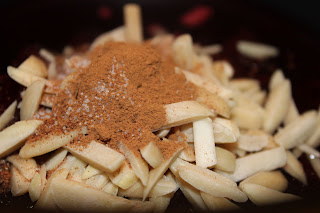 The slivered almonds and seasonings: bring the ingredients to a boil and simmer for two minutes on low heat. 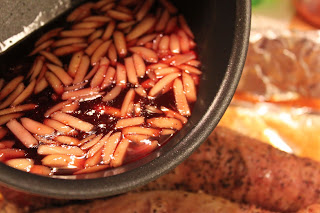 Towards the end of the cooking process, pour the sauce over the pork and bake for an additional 15 minutes. 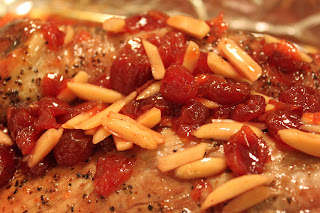 Bake until the pork is completely done and slice to serve.

My husband and I both enjoyed this dish. The sauce was sweet with cherry flavor. The cinnamon and nutmeg gave an undertone of warmth to the sweetness. The combination, while different than anything I had ever cooked, was familiar to both of us. It reminded us of a dish we had eaten in a restaurant on the Biltmore Estate while we were visiting at Christmas years ago. Before the kids came along and all traveling ceased... And, had I not stepped out of my comfort zone, I would have missed out on tasting that memory.
Branch out and enjoy!!
Posted by Kim McCallie at 12:09 PM